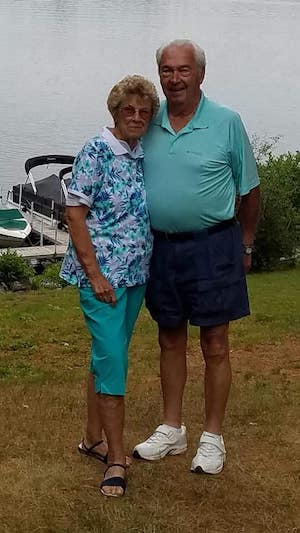 After nearly seven decades side-by-side, Ed and Barbara McCabe passed away peacefully hand-in-hand surrounded by their loved ones on September 7, 2021.

Ed was born on November 6, 1933, in Lowell, MA, the son of John McCabe and Aurore (Hamel) McCabe. After high school, he served with United States Navy aboard the U.S.S. Cascade and later worked for the Army Corps of Engineers. In addition, he co-owned a property development company working with rental and commercial properties. After he retired, Ed worked as a driver for Soft Desk in New Hampshire and as an attendant at Countryside Golf and Country Club near his Florida home.

He was a member of American Legion Post No. 81 in Contoocook, NH, where he ran the weekly Bingo night. He enjoyed camping and spending time at the club house at Blue Skies Community in Naples, FL, where the McCabe’s spent their winters for 30 years.

Barbara was born on April 13, 1936, in Lowell, MA, the daughter of William Rigg and Helen (Kimborowicz) Rigg. In high school, she was an elected officer, a rarity for a woman at that time. Barbara worked for Bank of New Hampshire for more than 30 years, where she served as one of the first female bank officers. She also worked as the overseer of the poor for the Town of Hopkinton, a position that allowed her to do what she enjoyed the most, helping others.

Throughout her life, Barbara was a volunteer for numerous local humanitarian organizations, including the St. Vincent de Paul Society, The Girl Scouts of America, The International Fellowship, the Hopkinton Community Center, local garden clubs and the Fresh Air Program. She enjoyed spending time with the Naples, FL, Garden Group and was an avid quilter and member of the Red Hat Society.

In their early years together, Barbara and Ed owned a diner and a vegetable stand, both in Lowell, MA. They later moved to Vermont, where they owned the Tank ‘N’ Tummy, a diner/gas station, where Ed did the cooking and Barbara waited tables. From there they moved to Contoocook, where they raised their children and lived for 54 years. Their home was always open, and they often had foreign exchange students and others who needed a place to stay living with them.

While in Contoocook, the McCabes owned several businesses, including an antique store and a country gift store.

They spent many summers camping with extended family at Eaton’s on Long Sands Beach in York, ME. They also owned a camp on Lake Massasecum in Bradford, NH, and spent more than 15 summers in a rented camp on Lake Josylvia in Contoocook, NH.

One of their great loves was traveling and going on cruises with friends and family.  The highlight of their travels was a four-month trek to Alaska and back in a camper van with their German Shepherd, Tasha. They celebrated their 50th wedding anniversary by taking their immediate and extended family on a cruise to the Caribbean.

In addition to his parents, Ed was predeceased by five sisters: Margaret, Eleanor, Pauline, Carol and Mary; and one brother, George.

Ed and Barbara are survived by their children Edward McCabe of Florida and Diane McCabe of Florida; Robert McCabe and his wife Karen, of North Sutton, NH; and Su Reale and her husband, Steve, of Hopkinton, NH.

Ed is survived by his three brothers, Bill, Jim and Jack.

Barbara is survived by two sisters, Leona and Ruth; a brother, Bill; and a bonus sister, Pat.

In addition to their relatives, they also leave a lifetime’s worth of close friends.

Donations in memory of Ed and Barbara may be made to The Alzheimer’s Association at act.alz.org. or Amedysis Hospice 8 Commerce Drive Suite 101 Bedford, NH 03110.