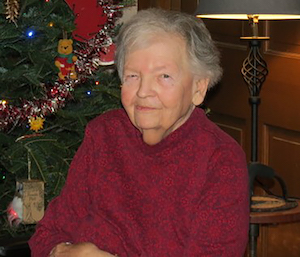 ANTRIM, NH:  Elisabeth (Betsy) Severance White passed away peacefully on March 5, 2022 after a period of declining health.  Betsy was born on August 29, 1933 in Groveton, NH to Charles and Gertrude Marshall Severance, living her childhood in Dalton, NH.  Betsy, at the young age of 16 attended Keene Teacher’s College. After graduating from Keene, Betsy taught first grade in Bennington, NH.  On June 19, 1955 she married Joseph Paige White of Antrim.  As Joe was in the Marine Corps, they spent a year at Camp Lejeune in North Carolina where Betsy also taught school.  Once Joe was discharged, they returned to New Hampshire.

Betsy and Joe had three children; Marshall, Charlie and Sarah.  In 1968, Joe passed away and Betsy raised their three children in Antrim.

Betsy was a member and Elder of the First Presbyterian Church in Antrim enjoying the support and life of the church.

Betsy was a member of the Order of the Eastern Star (Portia Chapter #14) in Hillsboro. S he held many positions in the local chapter. She then was elected to go through the chairs of the state. She served as Worthy Grand Matron for the state of NH twice as well as Grand Secretary for seven years. Betsy developed many close friends as she traveled the state. Prior to her passing she was the oldest living  past Worthy Grand Matron.

As her children grew, Betsy became involved in the community by serving as a Sunday School Teacher, Cub Scout Den Mother, Brownie Leader and Mom who took the neighborhood to Little League games and Gregg Lake.

A Memorial Service will be held at the First Presbyterian Church, Antrim NH on March 19, 2022 at 1 pm. We ask that those present to please wear a mask.  You may also view the service on Zoom. To register for the Zoom use this link: https://tinyurl.com/Betsy-WhiteMemorial.

The Holt-Woodbury Funeral Home & Cremation service is assisting the family.