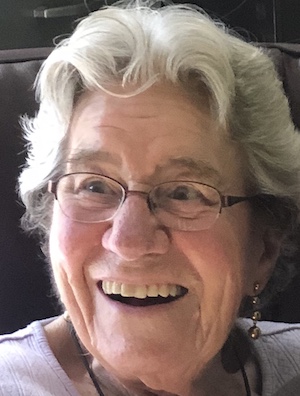 WEBSTER, NH:  Faith (Bartlett) Anderson passed away at Concord Hospital on July 17, 2021 after a period of declining health. She was born on  November 14, 1935 to Joseph and Annie Belle (Hadley) Bartlett.  She graduated from Simonds Free High School in Warner in 1953. After attending secretarial school in Boston, she worked at Concord Hospital in Medical Records.

Faith was married to Duane Anderson, her high school sweetheart, on October 15, 1955. She cooked and served school lunches at the Webster School, drove the “little  bus” in Webster, and worked for the Mellen Company for over 40 years.  Although she “retired” from the Mellen Company, she continued to do work for them until her hospitalization.  The work was brought to her from the “boys” and when it was done she would call and have them pick it up.

Faith was an organizational and project leader of the Early Hour 4-H club for many years. She had been a 4-H member growing up and knew the value of this program. She helped gain momentum for what is now the Merrimack County Oxbows 4-H club. She served as Secretary-Treasurer of the New England Ox Teamsters where she made many friends throughout New England and Nova Scotia.

Faith served as Treasurer of the Webster Congregational Church and organized many church suppers; her specialty was the “Roast Pork” dinner. She worked at the Webster Church booth, both at the booth and baking at home. In the early days of the booth, Faith was known to have baked 40-60 dozen dinner rolls to be served with the home cooked meals.  In later days, she was responsible for chocolate cream and lemon meringue pies as well as frying fresh donuts.

Faith served as a Supervisor of the Checklist from 2005-2011. She also served as a Trustee of the Webster Historical Society.

She enjoyed traveling to ox pulling events throughout New England.  She and Duane took oxen to compete in an international pull in Bridgewater, Nova Scotia on three occasions.  She also traveled to several Farm Bureau conferences and traveled to Alaska, Scotland, Oregon, and other areas of the country as well.

She is survived by daughter, Elaine Hashem and husband, George of Webster, her son, Dean Anderson and wife, Margaret of Salisbury, her granddaughters Sarah Hashem and Rebecca Socci and husband, Jesse, step-grandchildren, Kate Cilley and Ryan Cilley, a great grandson, Jacob Socci, a sister, Hope Lee Dunn and husband, Chet and  by nieces and nephews.

Calling hours will be Friday, 4 to 7 pm at the First Congregational Church of Webster.

Funeral services will be held on Saturday, July 24, at 11 a.m. at the First Congregational Church of Webster with burial following at Corser Hill Cemetery.

The Holt-Woodbury Funeral Home & Cremation Service Is assisting the family