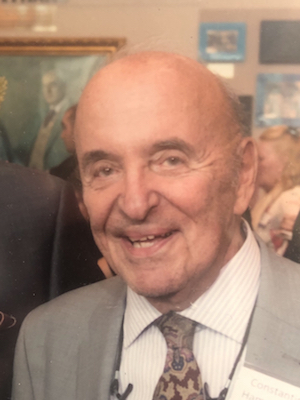 DUBLIN, NH:  Constantine L. Hampers, MD of Dublin, New Hampshire, passed away peacefully surrounded by his family on January 30, 2021 at the age of 88, following a brief illness complicated by a Covid-19 viral infection.

Dr. (“Gus”) Hampers was an accomplished academic medical researcher and teacher, a compassionate physician specializing in the treatment of renal disease, an innovative and fearless business pioneer who revolutionized the delivery of high quality, low-cost, chronic kidney dialysis, an advocate for kidney disease patients, an investor in cutting-edge medical technologies and a generous philanthropist.  Along with colleagues who trained at the Peter Bent Brigham Hospital (now Brigham and Women’s Hospital) in Boston in the mid-1960’s, Dr. Hampers founded and led National Medical Care, Inc. for over 30 years to become the world’s largest and most successful provider of dialysis services and products, sustaining the lives of millions of end-stage renal disease patients in the US and abroad.

Hampers was born in Pittsburgh, Pennsylvania on June 15, 1932, to Louis Constantine and Sofronia Hampers, who had come to the US from Greece in 1929.  He is survived by L. Joyce Hampers, his beloved wife of 56 years.  He was also devoted to their three sons:  Louis C. Hampers, MD of Denver, Colorado, Marcus J. Hampers MD of Plainfield, New Hampshire and Douglas A. Hampers MD of San Diego, California; and his five grandchildren:  Constantine (Dean) Hampers, Marcus, Nicholas, Mason and Lila Hampers as well as his twin sister, Helen Gray of Chapel Hill, North Carolina, and his six nieces and nephews:  Peter Palmer, William Gray, MD, Sandra Palmer, PHD, Anthony Gray, MD, Victoria Vestuto and Louis Gray, JD.  He was predeceased by his sister, Elizabeth Palmer.

Gus Hampers arrived at the Brigham Hospital in 1964 as a Fellow in the Renal Division, the Director of Artificial Kidney Services and an Assistant Professor of Medicine at Harvard Medical School, all under the tutelage of the renowned nephrologist, Dr. John Merrill.  Hampers’ predecessor in that role the late, Dr. Eugene Schupak, who later became an NMC business partner, taught him how to operate the primitive artificial kidney machine (the “Kolff-Brigham Kidney”) during a visit to the Brigham in December 1963.  It did not take Hampers long to master the procedure, Schupak observed, “In all honesty, Gus Hampers is the smartest man I ever met in my life.”  Hampers earned his MD degree in 1958 from the University of Pittsburgh School of Medicine and following his internship, joined the US Navy in 1959.  Before coming to Boston, Dr. Hampers served on the resident medical staff at the Cook County Hospital in Chicago and the Philadelphia General Hospital.  Along with Dr. Ted Hager, who teamed up with Hampers to start NMC in 1969, Gus Hampers made the Brigham a center of excellence in chronic dialysis care, teaching and research.  As Nobel-prize winning surgeon, Joseph Murray, who performed the first successful kidney transplant at the Brigham in 1954, later stated, “People were coming to the Brigham from all over the world and Gus was the man in the trenches.  John Merrill started dialysis at the Brigham, but Gus Hampers perfected it.”  Certified in internal medicine and the author of over 100 publications and clinical papers, in 1967, Dr. Hampers co-authored with Dr. Schupak the standard reference book, “Long-Term Hemodialysis:  The Management of the Patient with Chronic Renal Failure”.  Hampers’ service and leadership were recognized in 2015 by the establishment of the Constantine L. Hampers MD Distinguished Chair in Renal Medicine at the Brigham and Women’s Hospital.

The demand for chronic kidney dialysis overwhelmed the capacity of hospitals.  Physicians, administrators, clergy and ethicists on “death committees” had to decide who would get the few available slots and who would die.  This was barbaric and unacceptable for Hampers and he crafted a solution to augment supply to meet the demand by harnessing the ingenuity of the private market to address the need through the expansion of quality dialysis services in convenient, low-cost, out-of-hospital settings.  Engaging his generation of kidney specialists, many of whom trained at the Brigham, Hampers built NMC from one small outpatient facility in Malden, Massachusetts into over 1,000 clinics worldwide.  The advent of the Medicare End-Stage Renal Disease Program in 1973 hastened the expansion and the combination of private financing, public healthcare insurance coverage and a strong network of high=quality medical directors was hugely successful and provided a replicable model for the delivery of many other health care services.  In a series of transactions in the late 1980’s and 1990’s, NMC was acquired by W.R. Grace & Company and subsequently sold to Fresenius Medical Care, Inc.

NMC and Hampers had critics who saw high-quality healthcare and financial gain as incompatible.  This did not deter Hampers.  Profit-making was not Hampers’ motivation in building NMC; it was a collateral and positive benefit to taking sure ESRD patients could access life-sustaining care that they could not otherwise secure.  The critics would never be convinced, but Hampers’ patients---like Peter Stuyvesant, one of Hampers’ first home dialysis patients---knew his real motivation.  One of his early colleagues at the Brigham noted, “They knew he’d do anything for them and they felt the same about him.”

The family has planned a funeral service for Saturday, May 22, 2021, at St. George Greek Orthodox Church in Keene, New Hampshire with interment to follow at the Dublin Cemetery in Dublin, New Hampshire, arranged by Holt-Woodbury Funeral Services in Hillsborough, New Hampshire.