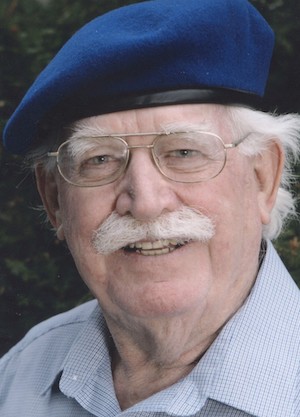 He was in Brookline, MA on August 5, 1924, the son of an Army officer.  Bruce Elliott enlisted in the Army in 1942, was commissioned a 2nd Lt in the Chemical Warfare Service, and served with General Patton’s 3rd Army in Europe. In 1950, Capt. Elliott led Company C of the 2nd Chemical Mortar Battalion with the Eighth Army from Pusan, South Korea, to major action at Unsan, North Korea.

Upon returning from Europe in 1945, he married Jean Schnepfe and they had four children, born in three countries, Bill, Judy, Penny and Laurie.  After 23 years active duty, he and his family retired to his mother’s native state, the place he called God’s Country, New Hampshire.

Bruce taught business and computer science for 20 years at New England College, then retired to a third career as a business consultant, desktop publisher, photographer and volunteer with many civic organizations in his beloved Henniker, NH. He loved nature and the simple life, did not tolerate fools, and lived a long life, always by his own rules.