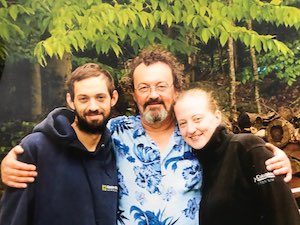 HILLSBORO, NH:  Terrance “Terry” Michael Thompson, long time resident of Hillsboro, NH, passed away in his home on August 1st, 2020 at age 64. Born in Keene, NH to Thurlon Thompson, Sr. and Shirley Pelkey, Terry graduated in the Class of 1974 from Thayer High School. He eventually moved to Hillsboro to be closer to his work. Terry worked at Osram Sylvania for almost 30 years as a machinist before retiring to spend more time with family.

Terry was of Christian faith, although current times had him attending Joel Osteen’s sermons from home. He was kind and very giving. Terry was a diehard New England fan that could talk sports all day long. He loved to be outside poking at a fire or throwing horseshoes with family and friends. You would rarely see Terry without a smile, he loved to laugh and make those around him laugh too.

Terry is survived by his children, Katrina Beaudoin of Concord NH and Tyler and Anna Mae Thompson of Hillsboro NH, his grandchildren, Lucas B. and TMT, his sister Rose Napierkoski, and many nieces, nephews, cousins, and friends.

Terry was predeceased by both of his parents and his older brother, Thurlon “Buzz” Thompson, Jr.  and his furry friend.

A graveside service will be held at Evergreen Cemetery in Winchester, NH at 11 am on August 15, 2020.  Those attending should feel free to wear their favorite sports jerseys/attire.