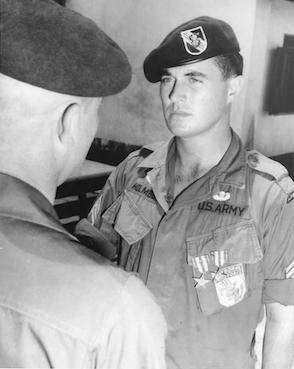 Born in Boston, MA, Peter graduated from Holliston High School, Holliston, MA.  He enlisted in the U.S. Army in 1964. After completing Special Forces medical training, he was assigned to the 5th Special Forces Group (Airborne), serving two tours in Vietnam from 1966 to 1969 with II Corps Mobile Guerrilla Company (Mike Force B20).

After retirement from the U.S. Army, Peter worked for the State of New Hampshire’s Forestry Service from 1995 to 2012.

In retirement, Peter enjoyed hiking and exploring New England’s countryside during road trips. He was a life member of the Special Forces Association and the VFW.

Peter is survived by his loving wife Charlotte Minor Vedel Holmberg and one son.

An interim memorial service will be in Merrimack, NH, and burial service with full military honors in Arlington National Cemetery will be announced.

In lieu of flowers, donations can be made to the Special Forces Charitable Trust.