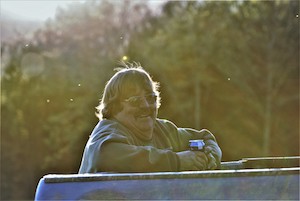 Rick was born in Peterborough, NH on December 20th, 1964 to his parents, George, Sr. and Priscilla (Washburn) Chicoine.

He is survived by his five children, Lauren (and Kevin) O'Grady, Haleigh Chicoine, Kayla (and Doug) Trow, Richard, Jr., Adam Chicoine, and his two granddaughters, Olivia and Lyla Trow.  He also leaves behind his father, his brother, George Jr., his sister, Jodi, several nieces and nephews, as well as great nieces and nephews. He was predeceased by his mother, and his nephew, Justin.

Rick graduated from ConVal High School in 1983. He went on to work at Monadnock Paper Mills, Inc. and had been employed there for the last 35 years. In his free time he enjoyed building trucks, four-wheeling, jeeping, snowmobiling, being in his garage surrounded by friends, sitting on his stool having a cold one, listening to his favorite music (as loud as possible), and spending time with his children and granddaughters. He was an avid NASCAR fan and enjoyed helping to build race cars and being on the "pit crew" for the Poodiack & Kimball racing team.

Rick was a loving father, "grampa", son, brother, uncle, and friend. He was always there to lend a helping hand- whether it was rescuing someone stuck in the woods, or someone needing to borrow a wrench. He will be deeply missed by those who knew and loved him, but the memories and laughs so many have shared with him over the years, will live on forever.

A celebration of life will be held at a later date, to be announced by the family.