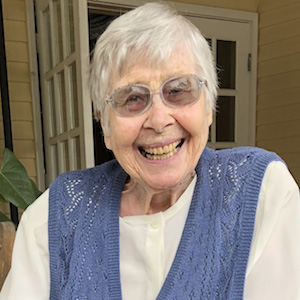 FRANCESTOWN, NH: Dorothy Schneider Wagner, 92, died unexpectedly on Thursday, October 4, 2018, at the Hillsboro House nursing home in Hillsborough, NH.  She was born in Jersey City, NJ, on March 20, 1926.  After receiving a B.S. in Mathematics from the New Jersey College for Women (later renamed Douglass College), she worked as a statistician for AT&T Long Lines in Manhattan prior to marrying Robert Louis Wagner in 1950.  She enjoyed dining out, dancing, traveling, and antiquing with him.  As they raised three children, she found mothering to be joyful and fulfilling; she later took similar delight in nurturing relationships with her five grandchildren.

Dorothy had an outgoing personality and a quick smile that lit up her face; she loved people, relished spending time with family and friends, and faithfully maintained correspondence with them throughout her life.  An accomplished pianist in her youth, she continued to derive great pleasure from both music and theater thereafter.  Later in life, she took up tennis, playing almost daily into her seventies.  She appreciated good food and wine, and enjoyed cooking, baking, gardening, reading, taking photographs, and poring over The New York Times.  Her well-known love of the ocean began in childhood and never abated; in later years, she delighted in being able to see the water from her home in Sea Bright, NJ.

Volunteering for a variety of causes over four decades brought Dorothy great satisfaction; numerous organizations—including the Boy Scouts, the Girl Scouts, the CONTACT crisis hotline, Meals on Wheels, and the IRS Volunteer Income Tax Assistance program—benefited from her dedication.  She also found multiple ways to be of service to the United Methodist Church of Red Bank, NJ, of which she was an active member.  In 1987, the Monmouth County Advisory Commission on the Status of Women honored her with a Women of Achievement Award for her development of a literacy program in Long Branch, NJ inspired by her experience as a Laubach Literacy tutor in Bethesda, MD.

She is survived by a son, Douglass Robert, of Cambridge, WI; two daughters, Janet Wagner Hazel, of Francestown, NH, and Nancy Wagner Townsend, of Franktown, VA; a brother, Arnold C. Schneider, Jr., of Newtown Square, PA; five grandchildren; and a great-granddaughter.  She was predeceased by her husband in 1994.  The family is deeply appreciative of the compassionate, personalized care that Dorothy received from the staff at Hillsboro House and from many other caregivers throughout her last years.

A Celebration of Life will take place at 11:00 a.m. on Saturday, October 27, at the United Methodist Church of Red Bank, 247 Broad Street, Red Bank, NJ, followed by interment in the church’s memorial garden.  In lieu of flowers, donations may be made in memoriam to Douglass Residential College; Attn: Office of Development; College Hall, Room 302; 125 George Street; New Brunswick, NJ  08901.

The Holt–Woodbury Funeral Home & Cremation Service in Hillsborough, NH, is assisting the family.