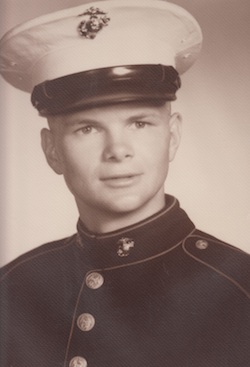 He was born in Pittsfield, NH on October 31, 1939 the oldest son of Harold B. Arey II and Agnes Sanborn Arey.

He served multiple deployments in the U.S. Marine Corp from 1958 to 1979.  He was married to Sarah Hatcher.  Harold was a truck driver, a welder/fabricator and did truck maintenance.  He was a volunteer firefighter for the Town of Chichester, NH,  and served as a selectman and the town librarian as well.  He enjoyed farming, teaching kid’s rifle teams and training dogs.  He also enjoyed hunting, fishing, trapping, competition shooting, hiking, camping, wilderness survival, cooking, gardening, blacksmithing and woodworking.  He got to live out his childhood dream of living like a mountain man.  He was a born again Christian and treated most people as if they were his own family.

He is survived by his daughters, Ida (Meg) Lavalley and her husband, Richard of Webster, NH, Emily R. Lauri and her husband Gregory of Islip, NY; his son, Harold (Ben) Arey, IV and his wife, Megan of Barnstead, NH; eight grandchildren, Jena LaValley of Webster, NH, Carlie Leogrande, Palmer Lauri, Amy Leogrande, Taylor Lauri and Tucker Lauri, all of Islip, NY, Harold B. Arey, V (L.B.) and Charlie W. Arey both of Barnstead, NH; and his brother, Bruce Arey of Rumney, NH.  He was predeceased by his wife, Sara and his brother, Wayne Arey.