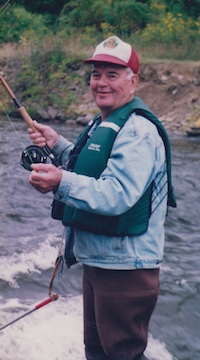 He was born July 19, 1921 in Bennington NH, the son of the late James D. and Anne (Murdock) Nazer, and was one of eight children.

He is predeceased by his wife of 40 years, Alida Nazer, who died in 1983, and his daughter Kerry L. Nazer who died in 2014; also his brothers James, Albert, John and Fred and his sister Mary Burke.

George was a logger his entire life, working in the woods until his late eighties.  He was honest and hard-working and passed these traits along to his children and grandchildren.

appreciate nature, enjoy the birds and their songs and love the outdoors.

His love for the outdoors included gardening.  His yearly vegetable garden was consistently very productive and he always enjoyed saying he was “going to reap the harvest.”

George was a veteran of WWII who served in the 5th Army, 85th Infantry, 339th Regiment in North Africa, Italy and Germany.  Though he rarely spoke of his days of service, he was given a battlefield commission to 2nd Lieutenant for his courage and resourcefulness while serving in Italy.  It is not without notice that his passing occurred on the day we gratefully remember all veterans.

His kindness, positive attitude, humor and love of music and animals will be the memories that family and friends will always treasure.

The Holt-Woodbury Funeral Home & Cremation Service Hillsboro, NH is assisting the family with the services.