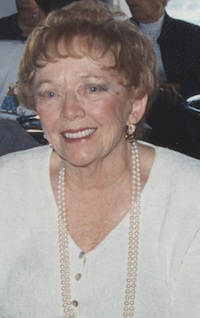 FRANCESTOWN, NH:  After a long and full life, Harriet Thomas Cope of Francestown died August 1st at her home.

Born in Swampscott, Massachusetts in 1914, she was educated at Swampscott High School and Simmons College.  Beginning in 1935, she worked as an administrator in the Department of Chemistry at MIT in Cambridge, Massachusetts, where she remained for thirty years.  She served in the office of Naval Operations for the port of Boston during World War II. Her parents were Harry Bassett Thomas of Swampscott and Ruth Thomas Osgood of Francestown.

In 1966, she moved to Francestown, and began restoration of the historic Poor Farm. This was her fiftieth year living in town. She owned and ran Travel Consultants in Peterborough until 1999, sharing her love of travel. She herself travelled widely, but always loved coming home to both friends and serenity in Francestown.

She enjoyed the mountains, gardening, wildlife, and her circle of close friends.  Mrs. Cope cared deeply about preserving New Hampshire's wild lands, supporting the Francestown Land Trust as well as The Society for the Protection of New Hampshire Forests.  As well, she appreciated Francestown's historic buildings, especially The Old Meeting House.

Mrs. Cope was predeceased by her brothers Norman Curtis Thomas of Newport News, Virginia, and Russell Payne Thomas of Sherman Oaks, California. She was also predeceased by husbands Houghton Hugard of Swampscott, David Packard of New Ipswich, and Arthur Cope of Boston. She is survived by her son, Gregory, her daughter in law, Comfort, and two grandchildren, Eliza and Thomas. She will be remembered for her lively personality and frequent reminder, “Accentuate the positive.”

Contributions may be made to The Old Meeting House of Francestown, francestownmeetinghouse.org, or to the Francestown Land Trust, francestownlandtrust.org.

At her request, memorial services and burial will be private.