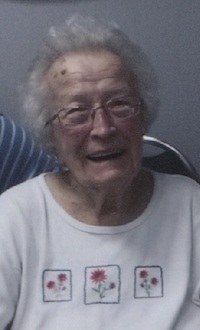 FRANCESTOWN, NH:  Catherine H. (Tebich) Abbott 101, died August 14, 2017 at Hillsboro County Nursing Home just 8 days prior to her 102nd birthday. She was born in Manchester, NH, August 22, 1915 and was married in 1945 to C. William Abbott. They moved to Francestown after WWll.  Kitty was predeceased by her husband and her son in law David Rowean. She is survived by her two daughters Beverly Abbott-Rowean of Francestown and Bill-Lee Kit Abbott of New Boston. She is also survived by many nieces and nephews.

Kitty, as most people called her, served as tax collector for the Town of Francestown from 1961 to 1975 and maintained an office in her home on Bennington Road.

She was also a seamstress and did clothing alterations in addition to wedding gowns and prom dresses for many local residents. Kitty was also active in the early years of the Francestown Community Church (Brown Church) Womens Guild where she sewed many pot holders, aprons and other items popular back in those days for the annual church fair.  She was an avid knitter, also did needle point, and tole tray art stenciling. She enjoyed working in her vegetable and flower gardens, jig saw puzzles, she was an avid reader and enjoyed watching the birds, and wildlife that frequented her back yard, she loved animals including her many dogs over the years.

Funeral arrangements will be at the discretion of the family discretion and will be private.